Trade, Service and Investment company is one of the fastest growing corporate  sectors  in Indonesia. This is due to the many needs and  desires of the  community are unlimited. Where the company established of course also has the  main  goal  of  obtaining maximum  profit/profit  from  the activities carried out in developing the company. The purpose of this study is to determine the effect of Working Capital Turnover, Fixed Asset Turnover,  Debt To Total Assets Ratio and Earning Per Share  on Return On Assets with Current Ratio  as Moderating.

The final result of this study is Working Capital Turnover, Fixed Asset Turnover,Debt to Total Asset Ratio  and Earning per Share  simultaneously positively and significantly affect profitability in  Trade, Service &Invesment companies listed on the Indonesia Stock Exchange. Partial Turnover of Working Capital, Settlement of Fixed Assets, and  Debt To Total Assets Ratio has no effect and is insignificant to profitability, while Earning Per Share has an effect and is positive and significant to profitability. While the Current Ratio is not a moderation variable, so the Current Ratio cannot strengthen or weaken the relationship between independent and dependent variables. 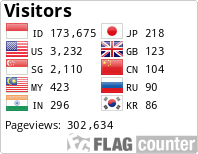